a blog from the Department of Systems Biology @ Harvard Medical School

How does a single pathway produce many outcomes?

One of the great puzzles of cellular signaling is that often the molecules responding to an external signal are the same, yet the outcome is different.  Take the MAP kinase pathway, for example: it’s activated by growth factors, cytokines and G protein coupled receptors, and in response to its activation the cell might differentiate, grow, decide to move, become senescent, or do other things.  Some of this diversity in response might be due to pre-existing conditions in the responding cell — perhaps some cells are hardwired to grow when the MAP kinase pathway is activated, and others are pre-programmed to senesce, but there’s lots of evidence that this can’t be the whole story.  Subcellular localization of important components may be another part of the explanation.  Increasingly, though, people are beginning to suspect that modulation of the dynamics of a signal — how long it lasts or whether it shows bistability, for example — may be an important part of the explanation of how the same signal can have different effects.  Galit Lahav and her colleagues have been pursuing this idea in the context of the p53 pathway — which also has many inputs and many outputs — and they’ve just secured an important piece of evidence: different signals clearly evoke different p53 dynamics (Batchelor et al. 2011. Stimulus-dependent dynamics of p53 in single cells.  Mol. Syst. Biol. doi:10.1038/msb.2011.20.

The reason the Lahav lab is obsessed with p53 dynamics is simple: they look too unusual to be unimportant.  In response to gamma-irradiation, as Galit showed in her post-doc work, individual cells produce pulses of p53 activation.  These pulses maintain the same average size and shape no matter how much DNA damage the cell has suffered, although the average number of pulses per cell does appear to change.  These repeated pulses are often called oscillations, but they really aren’t.  The pulses in p53 are driven by pulses in the upstream kinase (ATM) that signals the presence of DNA damage, and thus they probably result from the cell repeatedly checking for whether the DNA is still damaged, or whether the damage has been repaired;

if there’s more DNA damage, you might expect it to take longer to repair, which would explain the increased number of pulses when DNA damage is severe.  For some reason, the cell actively shuts off the kinase pulse inbetween “checks”: this is done via negative feedback through a phosphatase named Wip1, which the Lahav lab recently showed is essential to maintain the size and shape of the p53 pulses.  Once Wip1 has shut the ATM kinase down, the competition between ATM (activating p53) and Mdm2 (inducing the degradation of p53) shifts in favor of degradation, and the pulse shuts down.  To make all this more complicated, p53 is a transcription factor that activates the transcription of the proteins that regulate it (Mdm2 and Wip1), as well as that of many downstream genes.

Now, it’s been previously shown that different types of DNA damage, for example double-stranded DNA breaks (produced by gamma-irradiation or the drug NCS) and single-stranded DNA (produced by UV irradiation), can activate different downstream programs of transcription; they also result in different cellular behaviors, for example gamma irradiation is more likely to result in cell cycle arrest, while UV leads to apoptosis.  If you buy the argument that p53 dynamics are likely to be important in transferring the information content of these two signals, then you would expect the dynamics to be different in the two cases.  And they are.  While double-stranded DNA breaks lead to repeated stereotyped p53 pulses (same height, same width, different number), as described above, single-stranded DNA generates a single pulse that gets larger and wider as the dose of UV radiation increases. 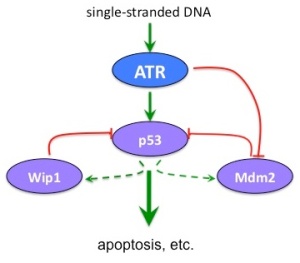 Batchelor et al. trace this difference to an apparently small difference in the network induced by single-stranded DNA.  The kinase induced by double-stranded DNA breaks is ATM, while the kinase induced by single-stranded DNA is ATR.  The two proteins are closely related, and have been thought of in the past as performing overlapping functions.  But it’s becoming recognized that they’re more different than we thought.  The important difference for p53 dynamics appears to be that the ATR kinase doesn’t get shut off by Wip1.  Since ATR doesn’t shut down, neither does p53: instead, the size of the p53 pulse continues to grow for as long as the ATR is activated.  One assumes that the length of time ATR is activated depends on the level of DNA damage inflicted; this would explain the larger size and longer duration of the pulses produced by higher doses of radiation.

Correlation does not imply causation; this paper doesn’t prove that p53 dynamics are responsible for the differences in transcriptional programs and eventual cell fate that result from the different forms of DNA damage. [But it would have been embarrassing if the result had gone the other way (same dynamics, different outcomes), wouldn’t it?]  Until we can find a way to manipulate the dynamics of p53 predictably, which is hard because of the multiplicity of positive and negative feedbacks in the network, we won’t know for sure if the dynamic behavior of p53 is carrying information or is just responding to whatever the real signal is.  But I find it difficult to believe that a beautiful piece of biological control like the p53 pulses in response to gamma irradiation is entirely irrelevant to p53’s function. More to come, no doubt.

You are currently reading How does a single pathway produce many outcomes? at It Takes 30.